It has been a common practice by the Africa Federation (AFED) office bearers to meet their counterparts whenever opportunities arose likewise, whilst on their private visits to the regions, be it Australasia, Canada, India, Pakistan, U.K. or USA, this practice has helped in enhancing further the relationships and collaboration between the regional partners.
In October/November 2018 the AFED Vice Chairman, Alhaj Aunali Khalfan whilst on his private visit to the USA and Canada had the opportunity to meet up with colleagues of the Organization of North American Shia Ithna-Asheri Muslim Communities (NASIMCO) in Toronto. The meeting on Friday, 2nd November with lunch was organized by NASIMCO at their office located in Jaffari Community Centre (ISIJ of Toronto), 9000 Bathurst Street, Thornhill, Ontario. 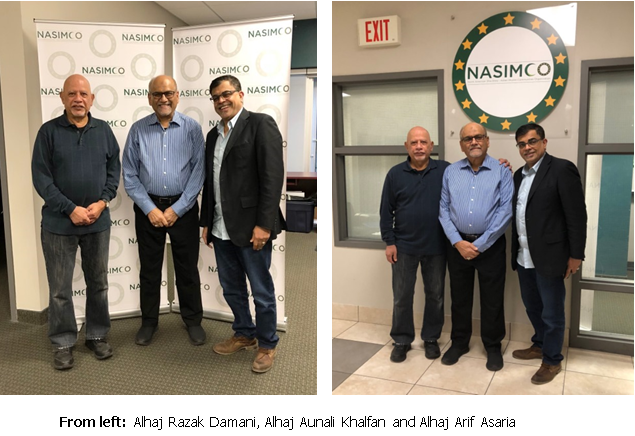 The meeting with the NASIMCO President, Alhaj Razak Damani and the Hon. Secretary General, Alhaj Arif Asaria was quite fruitful and informative, various important topics were discussed concerning the current global challenges, the existing opportunities and the emerging new dynamics in a number of sectors including the economy. Envisioning towards the long term development, mainly in some parts of Africa, there seems a need for our community to invigorate and deploy its resources aptly for long-term profitable investments to improve financial stability and its development of our community.

Alhaj Aunali Khalfan explained about the AFED’s income generating investment known as Umoja Commercial Complex. The Phase I of the Complex comprises of 20 spacious and modern warehouses completed in August 2015 during the tenure of Alhaj Anwarali Dharamsi, the immediate past Chairman of Africa Federation and currently the President of the World Federation. Insha’allah, Phase II of this project comprising of showrooms and offices are being planned to start early next year.

Alhaj Aunali Khalfan also explained on several other projects being undertaken by AFED in several parts of Africa, i.e. housing projects. Some of these projects are in collaboration with the World Federation and some with the Jamaats and with a donor.

The importance of Higher Education and Professional Career for students from our community in Africa was emphasized; similarly the subject of Loan Schemes was discussed with more emphasis on timely repayment of Education Loans by students who have completed their studies thereby enabling the Schemes to succeed so that other students are not deprived of similar facilities.

Discussions also focused on collaboration and partnering in some key areas with the aim to support the under-privileged and needy families of our community, with a focus primarily in education, health and housing.

During this visit, the Vice Chairman, Alhaj Aunali Khalfan also met with several members of our community and Toronto Jamaat officials in Toronto; and participated in the Majlis-e-Aza of Imam Hussain (A.S.) during the 3 nights including the 40th Majlis of Shohada-e-Karbala (Arbaeen) day.

It was heartwarming to note that many people in Toronto take keen interest in AFED’s activities, social services and religious programs which take place in our Jamaats and Bilal Muslim Missions, i.e. in DRC- Congo, East Africa, Madagascar, Mauritius, Mozambique, Burundi and Reunion. It was also noted that the regular AFED News Bulletins from the Secretariat, Boards, Archives News and Bilal Muslim Mission news are well received and read by large number of our community members, also in several states in the USA.

When asked about the weather in Toronto, Aunali bhai commented “The weather was mild, thankfully not the usual cold weather one expects in Toronto during this time”.

On Thursday, 8th November 2018, the Africa Federation (AFED) Chairman, Alhaj Shabir Najafi was invited by the Council of European Jamaats (COEJ) for a visit to their Office in London, U.K. Several topics of common interest were discussed during the visit with the COEJ officials. The visit is aligned with the AFED’s continuous efforts underpinning the importance of collaboration and strengthening relationships with its regional partners having common objective of serving the community better and more efficiently. This is also aligned with the parent body – World Federation motto – “We Exist To Serve” 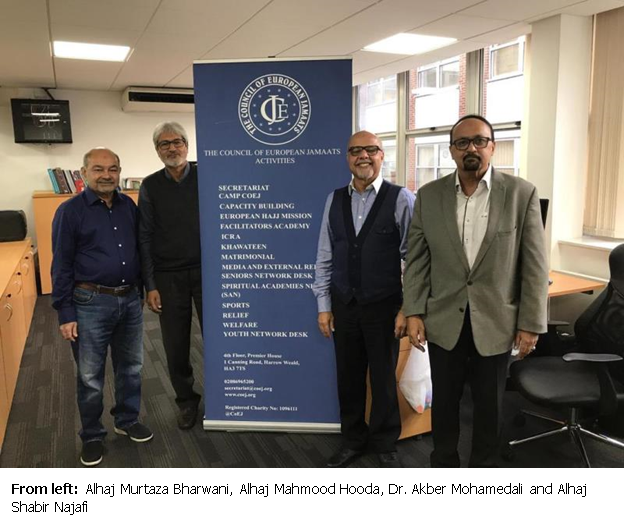 AFED with NASIMCO and COEJ have agreed to meet regularly, to exchange views and review the progress of the collaboration etc.

The Secretariat would like to acknowledge and thank both, NASIMCO and COEJ office bearers for dedicating their valuable time for the meetings.

admin - April 11, 2019
0
The Chairman of the Federation of the Khoja Shia Ithna-Asheri Jamaats of Africa (AFED), Alhaj Shabir Najafi, the Vice Chairman Alhaj Aunali Khalfan, the...