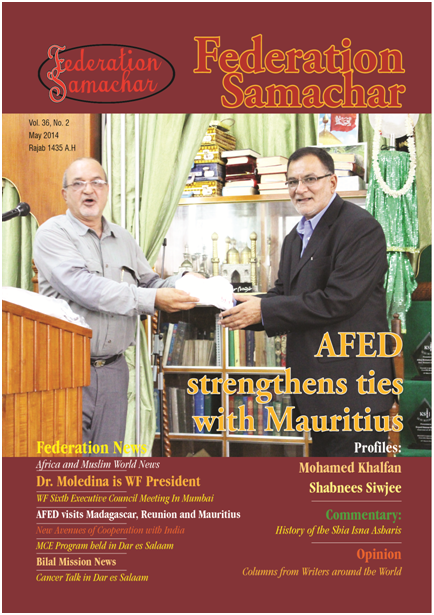 The May 2014 issue of the Federation Samachar, the magazine of the Federation of KSI Jamaats of Africa was released in Dar es Salaam on 2nd May, 2014. Copies will be available to Jamaats in Africa, Europe, India, Australia and North America from this week. Jamaats outside Africa will receive copies within two weeks.

This 100 page issue carries news and views (from at least eight correspondents) from around the world with global community news including the history of the Khoja Shia Ithna-Asheris and the news of Dr. Moledina being re-elected as President of the World Federation.

Read about our community’s progress in Madagascar, Mauritius and Reunion and of medical facilities created in India by the Africa Federation. The Black and White column provides contrasting views on a recent majlis delivered by a preacher and individual profiles cover Mohamed Khalfan of Dar es Salaam and Shabnees Siwjee of Toronto.

Other articles touch on the history of the Mughal Empire, Freedom as Development and questions on why Islam continues to be a misunderstood religion. Also read thought-provoking articles from other correspondents.

Do not miss this issue.

admin - April 10, 2019
0
AFED LAUNCHES THE “HEROES OF KARBALA” CAMPAIGN The Africa Federation is launching a Campaign “Heroes of Karbala” for the children of the Community as part of...