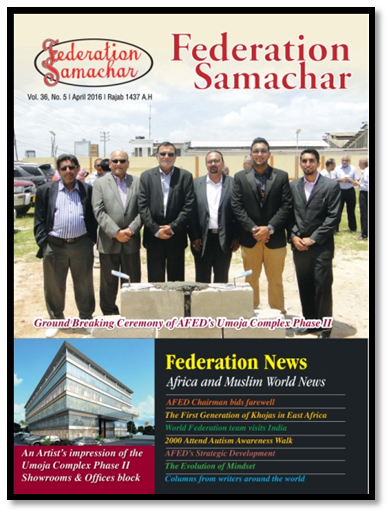 The April 2016 issue of Federation Samachar, the magazine of the Federation of KSI Jamaats of Africa, is now available. Copies will be available to Jamaats in Africa very soon, and Jamaats outside Africa will receive copies in the next few weeks.
This 77-page issue carries news and views from correspondents and guest columnists from around the world.

International news includes information about Melbourne Jamaat’s mosque project, and major awards given to our community professionals such as Dr. Muhammad Walji and Ali Khatau, and a story about 9-year-old Maliha Amarsi who received an invitation to the White House with her mother.

Guest Columnists such as Hassan A.M. Jaffer and Africa Federation Chair Elect Shabir Najafi have penned thought-provoking articles to prepare us for the future, entitled “The Evolution of Mindset”, and “AFED’s Strategic Development and Sustainability” respectively.

Our regular features such as Down Memory Lane and a debate about religious counseling on Black and White will continue to captivate our readers’ interest.

Do not miss this issue!

admin - April 10, 2019
0
CIRCULAR NO: JMT/141/12 A TRIBUTE TO A LEGENDARY MISSIONARY, A VISIONARY, A PROLIFIC WRITER AND A DISTINGUISHED SCHOLAR – THE CHAIRMAN OF THE AFRICA FEDERATION,...