At the meeting of the Jamaat held in Zanzibar on 29th January 2018, the following members were appointed to form an Interim Care-Taker Committee to run the affairs of the Jamaat.

Br. Naushad Suleiman Allarakhia, a stalwart with a long experience in Jamaat activities continues to hold the post of a Trustee of the Jamaat.

The Interim Committee has appointed Br. Abbas Mahmood Kadhim, Committee Member to assist the Managing Committee in the matters of the Jamaat.

The first Joint Meeting between the Interim Committee and the Africa Federation office bearers was held at the AFED office in Dar es Salaam on Saturday, 10th February 2018, the meeting covered various issues of common interest with fruitful outcome. 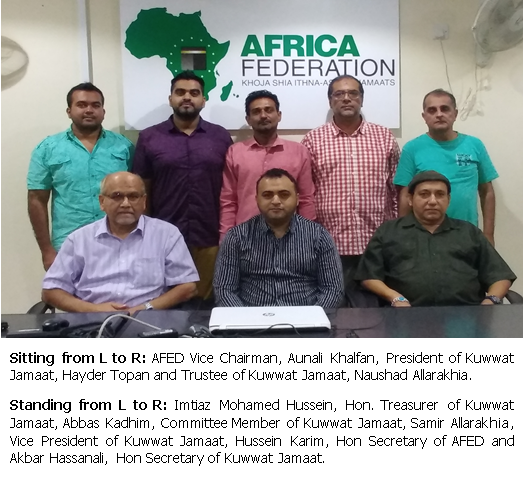 The Interim Committee expressed their noble intentions of working towards the development and progress of the KSI Kuwwatul Islam Jamaat of Zanzibar and its members. We wish them every success in their efforts and determinations. We pray to Allah (SWT) to grant them Tawfeeqat to carry out their duties for the pleasure of Allah (SWT), Ameen.

admin - April 10, 2019
0
EID CARDS 1437 AH - SELECTION FOR THE AFRICA FEDERATION The Africa Federation Secretariat once again invited participation of children aged between 6 to 12...