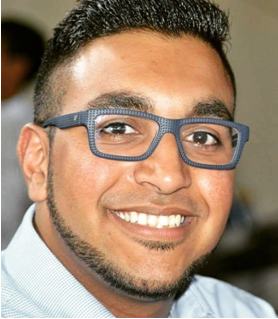 The Africa Federation Chairman, Alhaj Anwarali Dharamsi is pleased to appoint Br. Alihassan Fazleali Kassam of Dar es Salaam as the new Honorary Assistant Secretary for the term ending April 2016. He is replacing Br. Kumail Mohamed Manji who has taken up the position of Secretary General of the World Federation of KSI Muslim Communities. The appointment of Br. Alihassan is with immediate effect.

A brief Profile of Br. Alihassan:

Born on 23rd February, 1995 in Dar es Salaam, Tanzania, Alihassan pursued his Secondary Education at Shaaban Robert Secondary School in Dar es Salaam where he completed in 2011. He enrolled in the University of Dar es Salaam in the year 2013 for a Certificate in Law course, and currently pursuing a Degree in Law.

A young, dynamic and enthusiastic Alihassan gained inspiration and passion for volunteerism and social services from his father, who is a successful businessman and also actively involved in youth organizations of our community, Inthna-Asheri Union and Union Sports Club of Dar es Salaam – Volunteerism, social and spiritual services runs in the family going back to his grandfather who was actively involved in the Jamaat of Kigoma, a town located in western Tanzania and later moved to Dar es Salaam in 1997.

From a young age, Alihassan has been involved in several youth related activities, for instance in the administration of Sports Club, Debating Society of Husseini Madressah, Ithna-Asheri Union Volunteer Corp (IUVC), Literary Section of Ithna-Asheri Union and in the organization of the World Federation and Africa Federation Conferences and Supreme Council Sessions in Dar es Salaam. He is passionate with the AFED Solidarity Day Fund Raising project and remained a member of the Solidarity Day Ad-Hoc Committee for the past three years.

A keen and active sportsman, he has represented the community in various tournaments, for example; Volleyball, Football, Cricket and Table Tennis are some of the sports that fascinate him.

Alihassan in his own words says: “My greatest inspiration has been my Dad, he has been a tremendous help and a role model for me, I have grown in an environment where selflessness has been a fundamental factor and a family ethos, certainly this has made a positive impact on my life and my decisions. Today I feel greatly honored and privileged to have got the opportunity to serve the Africa Federation Secretariat as the Honorary Assistant Secretary under the able leadership of the present office bearers of the Africa Federation, I look forward to make a positive contribution to the organization and to my community”

On behalf of the Africa Federation Chairman, my fellow office bearers and the Secretariat staff, I welcome Br. Alihassan Kassam to the team. I also take this opportunity to congratulate him on his appointment and wish him every success – Ameen.

Fill My Cup Appeal | Back to School Campaign

admin - April 10, 2019
0
As our children head back to school after the long summer break, the start of a new academic year is often one many look...