Imam Hussain (AS) said: “I revolted not for wickedness nor for fame. Verily I rose only to seek for rectification in the nation of my grandfather, The Messenger of Allah.”

Muharram is a month of remembrance & Shia Meditation that is often considered synonymous with the event of Ashura. Ashura, which means the “Tenth” in Arabic, refers to the tenth day of Muharram.  It is well-known because of its historical significance and mourning for the martyrdom of Hussein ibn Ali (AS), the grandson of Prophet Muhammad (SAWW).

Alhamdulillah by the Grace of Allah (SWT) the Bilal Muslim Mission of Tanzania was able to carry out a number of activities during this month of grief in all it’s 75 centers in 6 regions. 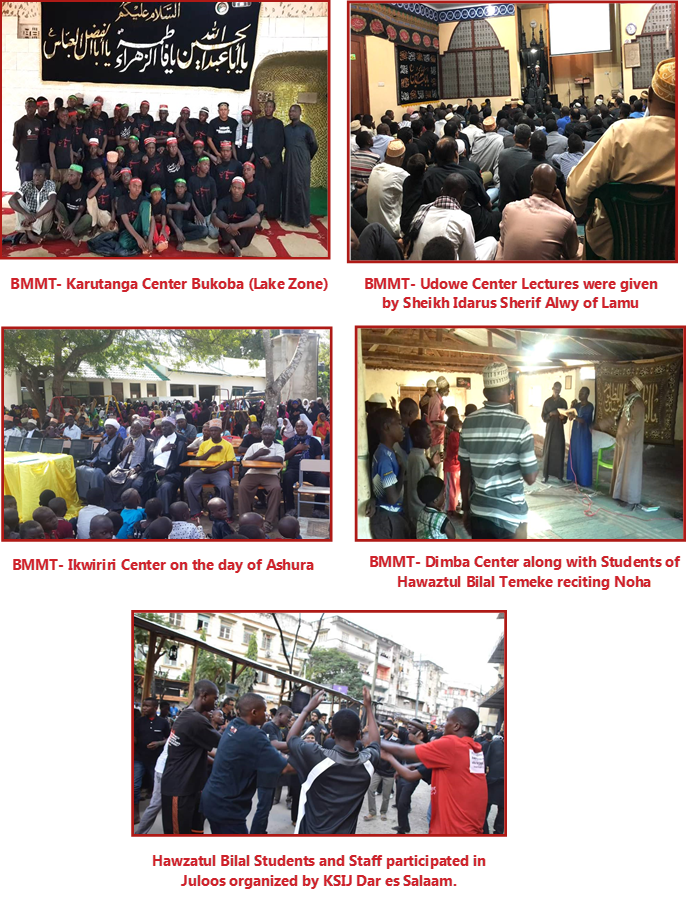 The BMMT Office had a stall at the KSIJ Imambaragh – Dar-es-Salaam during the 12 days of Muharram which helped make the Community members aware of the activities BMMT are involved in.

As our aim is to propagate the true religion of Islam and the teachings of AhlulBayt (AS), a total of 21 students from Hawzatul Bilal – Temeke, Dar es Salaam were sent to Dimba, Newala, Ikwiriri, Msata, Mbog, Moshi, Kileo and Kikavu to do Tabligh and deliver the massage of Abi Abdillah Alhussein (AS) and the tragedy of Karbala to the Bilal community.

The Mission wishes to thank all the donors for their continued support in all our activities during Muharram 1440 AH/2018. May Allah (SWT) reward you in your life and hereafter. Ameen.